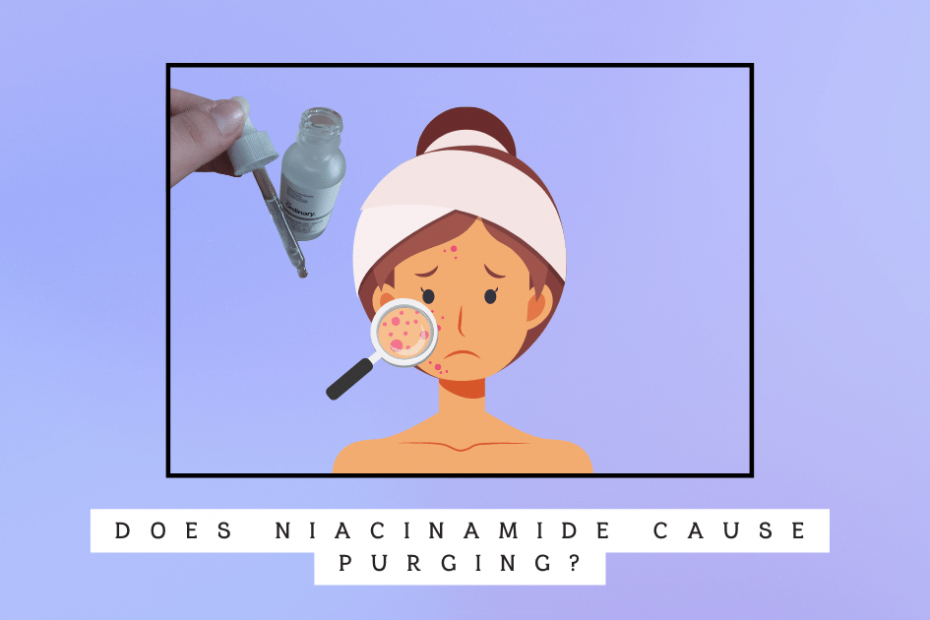 Does niacinamide cause purging? From enhancing the glow and smoothness of your skin to increasing tolerance to retinoids, Niacinamide has a wide range of applications in the skincare industry. It’ll often find its way to the serums you use for hyperpigmentation or acne.

In this article, we’ll take a look at the uses of niacinamide, whether it can cause irritation to your skin, and why.

Discovered during the mid-1930s, it’s been used both as an over-the-counter (OTC) drug and generic medicine ever since. The World Health Organization has designated Niacinamide as an essential medicine. Because of its anti-inflammatory properties, it’s often used in oral supplements and skincare products.

What’s So Great About Niacinamide?

Nicotinic acid is among those few super versatile skincare ingredients that can treat skin conditions from rosacea to atopic dermatitis to typical acne breakouts. It also has remarkable anti-aging qualities.

Being a powerful antioxidant, it has almost unmatched anti-inflammatory effects. Its uncanny ability to improve acne scars makes its serum a sure-success ointment for reducing redness and refining skin texture.

It’s also great for treating dark circles and oily skin. As it doesn’t get stored in our bodies, this skin-soothing ingredient is also usable for dietary intake.

The ordinary niacinamide 10 zinc 1 is used to treat skin blemishes. They also improve the health of the skin, minimize atypical pigmentation, etc.

Can Niacinamide Serums Cause a Bad Reaction?

So in very rare cases, people do report experiencing irritation in sensitive skin. You should also note that a skincare product contains many active ingredients. So, the effects of other chemicals on different skin types should also be accounted for before one starts finger-pointing at this otherwise gentle ingredient.

What Is Skin Purging?

New skincare products often increase skin cell turnover. This often results in active acne flare-ups. Especially if your skin is acne-prone, the breakout can be severe. Skin purging is a term to describe these kinds of situations.

Even though as less as 0.25% of the pores of your skin will go through active skin purging, nearly 30% of your pores, in case of a severe breakout, will contain microcomedones. These are the starting point of an acne pimple at a microscopic level. These little pouches are filled with bacteria, oil, and dead skin cells.

→ Take a look at what skin purging looks like

The inflated microcomedones block pores, and the clogged pores eventually cause purging. In its natural cycle, a microcomedone surfaces in 8 weeks. But when you apply an active ingredient that increases skin cell turnover, the process gets an additional boost. This rush of microcomedones triggers purging.

→ Skin purging vs a breakout

But all is not lost; in these cases, the sebum production decreases. This prevents the rapid forming of microcomedones. Thus despite the initial speedy skin cell turnover, the overall skin condition improves. After only a short time, you’re adorned with rejuvenated, healthier skin.

As you already know, purging is induced by active ingredients busting the turnover rate of skin cells. Because of purging, new skin cells pop up, exposing healthier skin.

Unfortunately, this also pushes the microcomedones out, resulting in skin irritation. These follicles filled with pus contain oil and dirt. A 2015 study found the surge of microcomedones to coincide with the presence of a high percentage of retinoids.

This led the researchers to conclude a cause-and-effect relation between retinoids and purging.

Now, the original question was, does niacinamide cause purging? That is, does Niacinamide have a similar effect? The answer is no. Ordinary niacinamide serums don’t increase skin cell turnover; the basic reason behind purging. There is little evidence showing a negative reaction of the skin to topical Niacinamide.

2016 research has again reinforced these long-proven anti-inflammatory qualities of nicotinamide.

That being said, there are reports of red and dry skin conditions when using a 10% niacinamide serum. If you face issues like that, try switching to a product with a lower concentration; for example, 4-5%.

The cases where niacinamide products do cause purging are usually accompanied by unusual skin conditions already deteriorated skin health or the presence of active ingredients such as retinol or glycolic acid. So be careful about these issues before you add a niacinamide serum to your skincare routine.

How Can You Evade “Niacinamide-Cause” Purging?

Niacinamide purging is an extremely rare phenomenon. As explained earlier, chemically speaking, nicotinic acid doesn’t cause purging. But we do understand your skin concerns. Here are some tips that’ll help you evade purging from any skin-care product, niacinamide-based or otherwise.

It’s always wise to consult your doctor before taking a new cosmetic product, be that something as simple as an ordinary niacinamide serum. Let the doctor or dermatologist decide whether the strength/concentration of the product and the frequency of its use are suitable for your skin type. Play it safe, then, sorry!

Before adding a particular product to your skin-care mix, try to know about it as much as you can. First, see what the manufacturers stated about the product. Then go through the review websites to know the opinions of the other users.

If you find someone to report irritation, see whether it was an isolated occurrence or not. It’s your skin to save, theirs to test!

Beautification has a lot to do with refinement. Washing your skin night and day with niacinamide products won’t do you much good. After all, our skin can successfully utilize only so many nutrients.

So be consistent in using cosmetics. But draw down the frequency and amount of it. By the way, this ‘less or more’ depends completely on your skin conditions. So keep that in mind too.

The patch test is a test done only on a small patch of one’s skin. Before regularly using a new product, the user applies it on a patch of their skin for a few days. If all goes well, it becomes user-certified!

Sounds cool, huh! Choose a small scale real-estate out of your highly valuable skin. Make sure it represents the part of your skin you’re planning on using it. But a bit of discretion is good; the back of the ear, or the jawline, for example. Test out the product for five subsequent days. If all is well, it’s unlikely to cause purging.

It’s always safer to use products with a concentration of 4-5% niacinamide rather than their 10% cousins like niacinamide 10 zinc 1. The low percentage of serums is much less likely to cause any purging.

What to Do if Niacinamide Serum Cause Purging?

Ideally, niacinamide products are unlikely to cause purging. Rather by decreasing oil production, they reduce the formation of bumps filled with oil. But if a negative reaction does occur, here’s what you should do:

You’ll have to find out where your skin is allergic to Niacinamide or if the product contained some other active ingredient that caused the irritation. Read the product description and find out whether it contains butyl stearate, oleic acid, or any other comedogenic chemical. If they’re there, switch to a non-comedogenic product.

If the product contains retinol or some other active ingredient, it’s probably the cause behind the purging. This means that if you persist in using the product, eventually, the purging will wane. So, continue using it.

I know how irritating it is to see the bumps filled with follicles clogged with oil. It’s very tempting to pick. But, like most cases, falling for temptation won’t bear good results. Don’t pick at the purge; it can even leave permanent marks on your skin! The same goes for scrubbing. If you scrub the bumps, it’ll cause further inflammation.

For a mild irritation, you can just wait till the irritation dies down. You can use beta hydroxy acids, benzoyl peroxide, or azelaic acid to reduce swelling and pain.

In case of a severe reaction such as bleeding, intense burring, skin infection, severe redness, etc., you’ll have to see a dermatologist immediately. If the situation is that bad, you should still consult your doctor to identify the ingredients that you’re sensitive to.

By now, you’ve got the answer to your original question, does niacinamide cause purging? The bottom line is that Niacinamide bears great results in the overwhelming majority of cases. Among its blessings are smooth and bright skin and a successful defense against inflammation and hyperpigmentation.

As Niacinamide has no chemical function that can cause purging, most likely, you’ll be fine using it. But if you do run into trouble using a niacinamide-based product, follow the steps, and you’ll come out smoothly and safely.