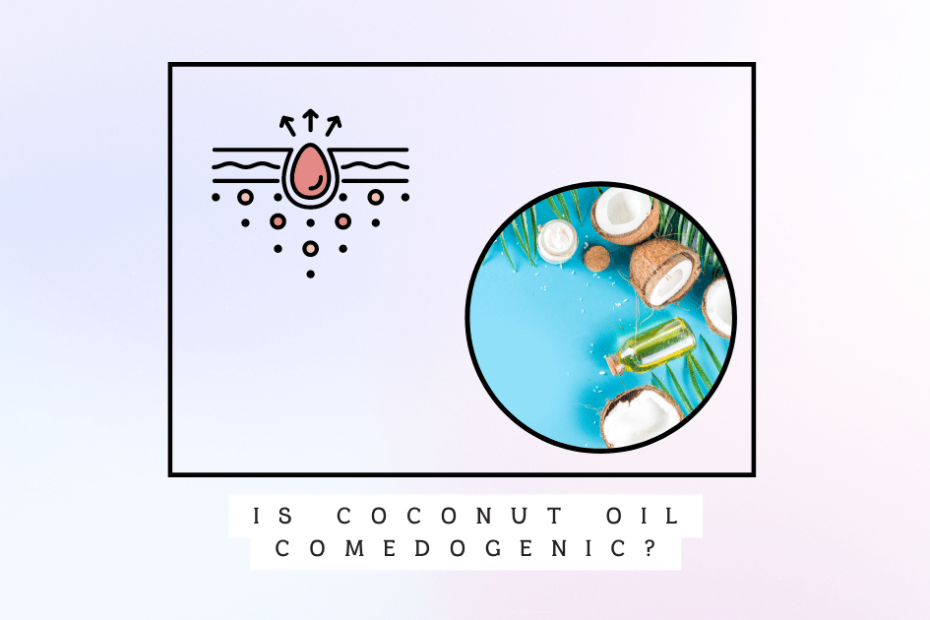 Coconut oil is one of those truly dynamic products that provides a multitude of benefits, so it’s easy to see why so many are trying it or already using it regularly. From hydrating even the driest of skin to its natural antimicrobial bacteria-fighting properties, there’s a lot to love about it. It can be applied naturally, directly on the skin, as a mixture, or even consumed as part of your diet.

So how does coconut oil fare on the comedogenic scale?

The answer here is, yes, coconut oil is actually highly comedogenic and can especially impact those with oily and acne-prone skin.

As we’ve described in detail in our Comedogenic article, the scale for measuring comedogenicity is not defined; however, coconut oil is overwhelmingly accepted in the scientific world as being comedogenic because of its chemical makeup and texture.

Coconut oil is made up of fatty acids and antioxidants and while the fatty acids can be good for your HDL (good cholesterol) levels when consumed orally, applying to the skin can be problematic, causing blackheads and breakouts.

Coconut oil is a thicker oil that doesn’t easily absorb into the skin. In fact, it often will create a barrier on your skin, trapping water and other dirt that may lead to clogged pores and acne.

As doctor Craig Austin, MD, notes in his interview with Byrdie, “when you use coconut oil, you’re applying an oil to your skin in combination with bacteria and dead skin cells—the oil essentially aids in ‘clogging’ the pore. C

oconut oil is one of the thicker oils, and the thicker the oil, the harder it is to get adequately absorbed by your skin, so it essentially sits on top of the dermis and forms a film over the pore. Bacteria and dead skin cells will then fester under the skin and cause your body to produce excess sebum, which can result in acne.”

Raw coconut oil will obviously be the thickest and most comedogenic. Coconut oil can also come in more processed versions or emulsions, in which the oil particles are smaller and often mixed with water and other ingredients, meaning they may be less likely to clog your pores. But even these emulsions may lead to breakouts for those with acne-prone and oily skin.

Because of this, there are many other non-comedogenic oils that are recommended in place of coconut oil, including:

While there is a lack of standardization for the comedogenic rating scale, coconut oil is widely agreed upon as being comedogenic.

Based on the many different sites we scoured, coconut oil comes in at a 4 on the comedogenic scale as a result of its thick texture, difficulty of being absorbed in the skin, ability to trap dead skin and bacteria, and likelihood of causing breakouts of those with oily and acne-prone skin.

So we’ve identified coconut oil as being comedogenic and likely to have an adverse effect for those with acne-prone and oily skin, but we’d be remiss not to also point out some of the benefits of using coconut oil.

Like anything else, different people will react differently to coconut oil and despite its comedogenic rating, may not see any adverse effects. Those who are not prone to breakouts may use it for its incredible moisturizing properties.

Others have incorporated it into their hair care routine as coconut oil can penetrate deep into hair strands, making them stronger, more flexible, and less likely to break.

Coconut oil is made of certain fatty acids that contain antimicrobial properties. Oddly enough, the myristic and lauric acids within coconut oil are helpful in fighting off acne-causing bacteria, viruses, and fungi.

Overall, coconut oil is highly comedogenic and not advised for use by those with oily and acne-prone skin. While it won’t impact every person the same way, and for some, may serve as an excellent moisturizer, there are better options for oils that are non-comedogenic, including argan, jojoba, hemp, and sunflower seed oils.