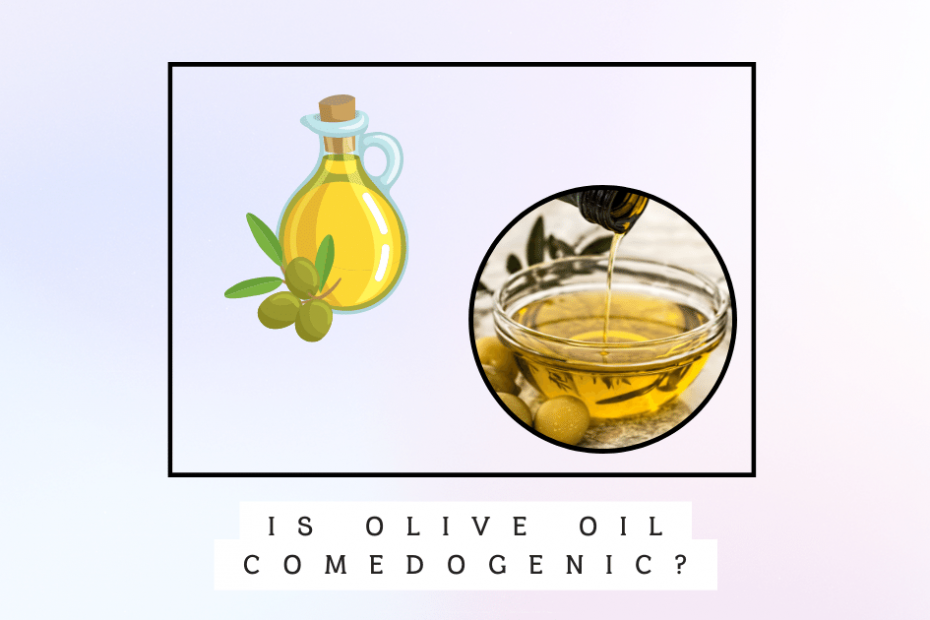 Most people may never have even considered olive oil for more than just a kitchen staple. But because of its antioxidant and moisturizing properties, olive oil is becoming more popular as a skin-care product.

So how does olive oil fare on the comedogenic scale?

The answer here is that olive oil is actually non-comedogenic.

As we’ve described in detail in our Comedogenic ingredient checker, the scale for measuring comedogenicity is not defined; however, olive oil has a moderately low likelihood of clogging pores and thus comes in as non-comedogenic.

Compared to other cooking oils, virgin and extra virgin olive oil undergo substantially less processing. Primarily derived from olives grown in Mediterranean countries like Italy, Greece, Portugal, and Spain, and even olives from California, olives must first be picked, then grinded and mixed into a paste before the oil can be separated via a centrifuge.

Olive oil comes in a variety of types, including its most purest and unrefined form called extra virgin olive oil. Also unrefined but slightly higher in oleic acidity levels is virgin olive oil. Refined oils might include “pure olive oil” or simply “olive oil” and these will lack some of the anti-oxidants, anti-inflammatories, and vitamins that make the unrefined oils so beneficial.

It’s important to use a high-quality, non-refined olive oil to ensure you get the proper nutrients and benefits. It’s also important to note that olive oil can be ruined if exposed to excessive heat, light, or oxygen, so make sure to store it properly.

Overall, olive oil is an antioxidant that is rich in fatty acids (oleic acid) and Vitamins A, D, E, and K.

Olive oil also contains squalene, which has antioxidant properties that may help prevent sun damage.  One study published in 2000 even suggests that extra virgin olive oil may aid in preventing and/or reducing cancer-causing cells and tumors.

While olive oil is non-comedogenic, it is a heavier oil that is rich in fatty acids. These fatty acids can foster an environment for bacteria to grow, which could lead to clogged pores and breakouts for those with acne-prone skin. So while it has many benefits, it may not be for everyone.

While there is a lack of standardization for the comedogenic rating scale, olive oil has a moderately low likelihood of clogging pores.

Based on the many different sites we scoured, olive oil consistently came in at a 2 on the comedogenic scale, meaning that it is technically non-comedogenic as it has only a moderately low likelihood of clogging pores, but it may not be the best option for those with oily skin.

Products in a Similar Range to Olive Oil

The following products also score a 2 on the comedogenic rating scale:

Benefits of Olive Oil in Skincare

Olive oil has been used on hair and skin for centuries. It’s even rumored that the great Cleopatra was a fan and used olive oil for its numerous benefits, including:

Overall, olive oil has many skincare benefits outside of just being a delicious option in the kitchen. As a moderately low scorer on the comedogenic scale, it will be a safe option for most looking for an excellent moisturizer and antioxidant. Just be sure to do a patch test before applying fully to avoid a reaction or breakout.