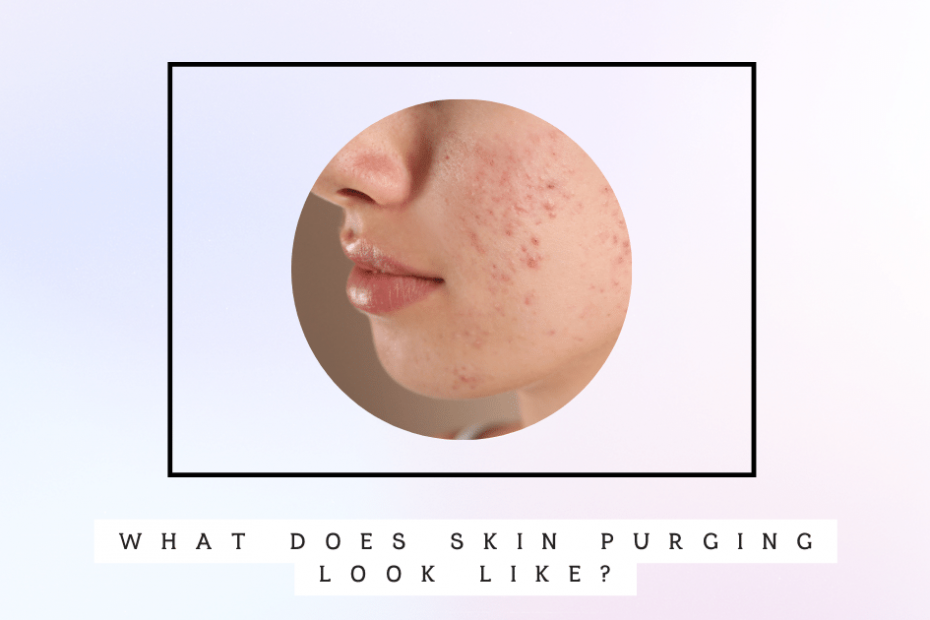 Skin purging occurs when strong skincare products cause redness, irritation, and inflammation. What does skin purging look like and how does it differ from regular acne and other dermatologic conditions?

What Is Skin Purging?

The idea of skin purging can bring unsightly images to mind, but it isn’t as horrible as you might think!

Skin purging happens when the skin experiences a reaction to skincare. These are usually stronger products, like exfoliating acids, tretinoin, and retinol.

As they remove a layer of dead skin cells, new skin cells can come through sooner than they would without assistance. The new skin cells can bring blockages, sebum, and skin flakes up to the surface with them. This can lead to breakouts, redness, or irritation, also known as skin purging.

If you’re experiencing skin purging, you won’t forever! It’s a temporary side effect of the skincare you’re using now. It also indicates that your products are working to remove dead skin cells, you just have to get through this period first.

You’ll find out more about skin purging in this article. You’ll also learn how to tell if your skin is purging or experiencing a breakout, as well as how to treat the condition.

Skin purging covers what the skin experiences when in contact with potent skincare products. These products may have particular active substances that cause skin cell turnover.

When dead skin cells are removed through exfoliation, newer ones start coming through, but they can bring congestion with them.

Skin purging usually occurs due to retinol and chemical exfoliating acids, like AHAs and BHAs.

→ Is Azelaic Acid An AHA?

Purging indicates that the natural skin exfoliation process has been sped up. When this occurs, you may notice light acne symptoms, like whiteheads or redness.

The skin tends to renew itself every month, but retinol or exfoliating acids are designed to accelerate this process.

Think of your skin as cleaning out its system. It will have certain substances within it that need to be eliminated before you can see the true effects of your skincare.

While chemical exfoliants and retinol are a common cause, manual exfoliation can cause skin purging too.

These can include physical scrubs, face/body brushes, and fruit enzymes. Any product that speeds up cell turnover could bring blockages up to the surface, causing purging.

Skin purging doesn’t happen to everyone, but those who tend to experience breakouts often may be more prone to purging.

Dietary or lifestyle changes may also encourage skin purging, as they may increase sebum production deep within the skin.

Skin purging usually looks like clusters of small, red bumps and little pimples or pustules that are painful to the touch.

They typically are accompanied by dry skin and flakiness along with whiteheads and blackheads.

Don’t let skin purging put you off buying new skincare products! Skin purging is unfortunate, but it will stop once your skin adjusts to the product.

You can’t prevent purging from occurring, but you can add a new product into your routine slowly. Gradually build up usage so your skin has time to regulate itself.

For instance, if you want to try a new retinol out, resist the temptation to use it every night. Instead, apply it once during the first week, then two times in the second week. Increase application in this way until you’re using the retinol every other day.

Monitor your skin closely, keeping an eye out for any sensitivity, breakouts, or irritation. If your skin seems fine, you can keep using the product.

If your skin does show signs of irritation, cut back on the application or cease using it completely.

Always look at the ingredients within a product before you buy it. Look back at any other skincare items that didn’t work with your skin and see if they contain any similar substances.

Everyone is different, so there may be some chemicals or compounds that won’t work with your skin.

Certain active ingredients can cause issues with some individuals, like salicylic acid or chemical sunscreens, even if the formulation is new.

If your skin hasn’t been that reactive in the past, experiment with products to see how your skin reacts.

Remember to apply once a week at first, working your way up gradually, examining the skin for any irritation.

Inflammatory acne covers several types of acne, as these symptoms occur when the body undergoes an inflammatory response.

Excess sebum can mix with dead skin cells inside of a pore, producing bacteria called P.acnes. The body sends white blood cells to attack the bacteria, causing inflammation in the process.

This is why pimples can look swollen and red, as they are an inflammatory response to bacteria.

Skin purging is a little different from inflammatory acne. Exfoliating acids or retinol don’t force bacteria out of your pores. They increase cell turnover instead, but this can affect skin that’s already inflamed.

Skin purging tries to clear your skin by removing the inflammation that’s causing acne symptoms. Products like vitamin A, AHAs, and BHAs will attempt to remove the acne, but if they cause skin purging, you might think that they’re making your skin worse.

So, skin purging vs a breakout – how do they differ and how can you tell them apart? All reactions to new skincare count as a skin purge, as the skin attempts to compensate for the new ingredients.

In some cases, a new product might negatively affect your skin for other reasons. This may be an allergic reaction that causes redness or irritation, or clogged pores that produce acne.

Sometimes, breakouts after using a new product might not be indicative of skin purging. They might be a general breakout instead. Here are a few tips that can help you know which is which.

How Long the Breakout Lasts For

Begin by monitoring how long the symptoms last. Acne caused by skin purging has a faster life cycle compared to general breakouts. If your pimples heal quickly, this is a good sign that they are the result of a purge.

If you begin using a new skincare item, but your breakout lasts longer than a month, the product might not be right for your skin and could be making your acne worse.

Purging brings deep congestion to the surface, which is why purges usually occur in places where you normally break out. If you experience acne symptoms in new areas, it’s unlikely to be a result of purging.

Skin purging occurs from exfoliating skincare, but breakouts normally occur from products that clog pores. Products that contain retinol, salicylic acid, or alpha or beta-hydroxy acids are more likely to cause skin purges.

Breakouts after using products like oils, sunscreens, or makeup, are more likely to be general breakouts than skin purging.

Unfortunately, the best way to treat a skin purge is to wait it out. This can be frustrating, especially as some purges can last for a few weeks, though this depends on how congested your skin is.

Keep using the product that’s causing the purge, but don’t add any new active ingredients into your routine. These may be exfoliating acids, retinol, or acne-fighting products.

Stick to a simple skincare routine with a light cleanser, moisturizer, and an SPF. It’s best to choose lightweight or oil-free products as these won’t clog your pores or add to your symptoms. Wait for a while and your skin should look better within a week.

There are a few things you can do to keep your skin healthy during a purge. As you would during general breakouts, drink plenty of water and don’t pick or pop any inflamed spots or pustules.

You can’t speed up the skin purging, but keeping hydrated and moisturized can prevent prolonging the process.

Skincare products that cause skin purging can increase the skin’s sensitivity to the sun, so remember to stay out of the sun and wear sun protection daily.

Purging can be annoying, but take it as a sign that your skincare products are doing their job. Once the period is over, your skin will have adjusted and you begin seeing a reduction in acne.

If you are experiencing a standard breakout instead of a purge, stop using the new skincare product. Switch to a basic skincare routine for a while until your skin calms down again.

If your acne symptoms last for over two weeks, you may want to cease using the product.

This may be because the product is clogging your pores, leading to traditional breakouts instead of a purge. The same applies if your pimples go away and come back after using the item.

It’s uncommon, but there are a few cases in which you should stop using a new skincare product completely.

Purging tends to stick to localized areas. Any widespread redness, burning, rashes, or stinging is indicative of an allergic reaction.

If this occurs, stop using the product immediately. If the symptoms don’t improve, see a medical professional as soon as possible.

Skin purging occurs when the skin reacts to a new product. These items will increase cell turnover, removing dead skin cells so new ones come to the surface. As this occurs, congestion can rise with the new skin cells and cause acne-like symptoms.

If you have acne symptoms after using a new product, it can be tough to know if you’re experiencing a purge or a general breakout.

A clue is the type of product you use. Exfoliating acids and retinol remove dead skin cells, so they’re likely to cause purging. Products like moisturizers, oils, and makeup can clog pores and lead to traditional breakouts.

If your skin is going through a purge, remember that this is a sign that your products are working!

You just need to get through this period before you see the results. If you can stick with it, you should start to notice glowing acne-free skin after a few weeks!